Mano, I was in France, but I didn’t see you! Grandpa laughs, he says I had still 800 kms to go further to our friend Mano! Ohhh, so…

Anyway, I was in France, yesterday! Grandpa did not come, he needed his rest after the training of earlier this week. Mum and dad needed papers out of a machine, a big one! A nice sir did help a bit… he even did not pay attention at this lady. He was in a bit of a hurry! The big machine was in the railwaystation, mum said… What’s that? Oh, the train-place! Yes, I know about that. We have a big one in Antwerp too! One of the 14 most beautiful train-places in the whole world! We are on number six in the British list. You don’t believe me? Just look!  http://nl.metrotime.be/2014/04/21/featured/de-14-mooiste-treinstations-ter-wereld/
Newsweek in the States did put us on number four in their list! Which list you take, we are always in the first ten! 🙂

But I was talking about France! Mum says I will become a real French lady, all these times I already went to France, by car and on foot!
They have nice flowers in France and a nice little harbour too… We did not visit the big harbour… grandpa was waiting, waiting for his dinner… Can’t come too late, can we? 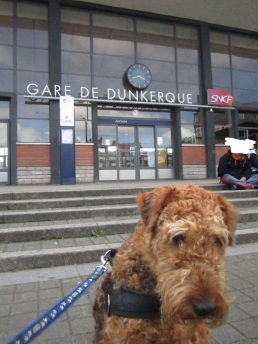 We go for a walk. 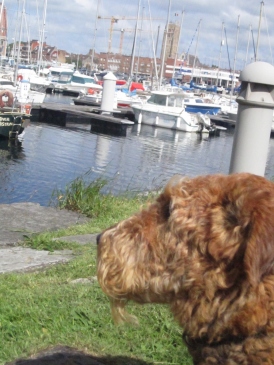