It does not happen easily, but a few days ago, me and mum went to the small dogpark. The reason? Two puppies!
Puppies have to be socilad, mum says! 🙂

Okay, for the socilading of these two…

Okay, mum, I get it! For the socilading of these two, we went to the little dogpark. Well, if the française has Duracell-batteries, these two have Double Duracell! Ella, the black/brown one is 6 months old, if I remember well. The name of the other one, we forgot. That one  is even much younger than Ella. That we remember very well!

So, I was entertaining the little ones to socilad them. Although I say it myself, I did a great job! There are pics and video to proof it!

This socilad-lady did quite a good job! 🙂 Proof????? Got treats afterwards. Next day we went back without the red blinking thing though! 😦 But I got treats again!

PS Enjoy the pics and video! ❤

When we came home from the huge dogpark, I called the française immediatly! Mum, where is she? Sleeping, you think? Lizzie, Lizzie!!!!!!!

Lizzie, Lizzie! I met Lizzie, 9 months old Lizzie! And she has Duracell-batteries as you have! My dogness, she can run! 🙂
Yes, we played a bit! Are you jealous now? I’ll show you the pics and the movie when mum puts it on the tv-typing-machine.
No, she is not an airedale, she is a poodle. Should ask mum though… 😉

Mum, every dog with the name Lizzie, do they all have of those batteries? 🙂 Why do you burst into laughter? 😉

PS After the playing, we did a little toot too. ❤ Movie is at the end! 😉 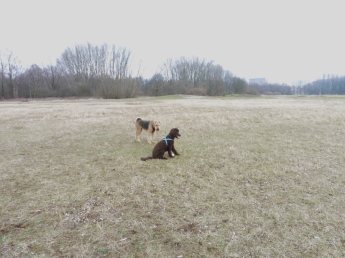 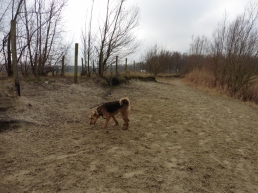 This unrivalled scene stems from the early fifties movie On the waterfront – a picture that I recommend wholeheartedly. Why do I quote the incomparable Marlon Brando here? What’s the point? Well, it’s all about that feeling! What it is like to be a failure, a weakling, a loser. Nobody conveys it better than he does, so strikingly, in these few sentences. Does that intense depressing sentiment surprise you at times as well?

Bent over Lizzie’s droppings is one of those moments in which I ask myself: what the hell am I doing? Lizzie gazes at me blankly, as if she were saying: don’t blame me, I did my thing as expected, and as far as I am concerned we can readily move on – I think I smell something intriguing over there, by the way… I point out to her – because I admit, that is what I do: I talk to her on our walks… – that I have to attend to my civil duties. The next moment I am messing around with my dog’s shit, as if we had committed a crime. The plastic bag –biodegradable, of course, what did you expect! – only gives in after a considerable struggle.

I won’t annoy you with an account of the occasions at which the bag, that we fatally bought too cheap of course, tears up and bursts open, and what this does to your hands, or your coat… Or the times at dusk that I planted the deep profiled sole of my boot in the soft excrements before I spotted them. Very unfortunate, for sure, but that is not what it is about here now. It is that moment, when you stand straight again, and you look around with the poop bag in your hand. You hadn’t noticed before, but… how much dirt is laying around here on the waterfront!

I feel like a loser, as I stand there, stricken, holding on to Lizzie’s poop bag. Conscientiously, I follow Lizzie around to catch her feces, while litter is ubiquitous with a blatant obviousness. Who throws all this rubbish on the ground? Don’t these people worry about our environment? Empty soda plastics, a package of half eaten fries with stew and mayonnaise (could have been curry sausage too, sniffing Lizzie undoubtedly knows it more accurately), a shattered Eristoff bottle (broken glass and dog paws: a no-go combination!)… Oh well, I’ll save you the details.

This is an ordinary weekday, not a Monday morning after a sunny summer weekend with lots of picnicking sunbathers, not The Day After a big event attended by thousands of people. No, an ordinary winter morning. I will not bore you with an apocalyptic description of what this place looks like after the New Year’s Eve frenzy… Suddenly it strikes me: why would I feel like a loser? Do I not consciously deposit the waste that I inevitably generate, in public trash cans? Am I to be considered a whiner then, if I complain about this obnoxious behaviour?

Who is the loser in this story after all? I imagine Marlon Brando saying to those who leave litter behind: “You don’t understand! You coulda had class. You coulda been a contender. You coulda been somebody, instead of a bum, which is what you are. Let’s face it.” (jhv)