As said yesterday, the almost-drowning-part was on the way back from France to Belgium… not so nice a memory… 😦

Besides that the walk was great! I played with little Arthur going to France. In Bray Dunes, we had a drink, my mum and me, on a terrace with a very nice sir! I got my big drink for free! 🙂 Only mum had to pay! 🙂 I was thirsty and finished it all, so did mum with hers! 🙂

Not far from Bray Dunes, mum called me and did put me on the leash. What did she see that I did not sniff or see before her? A dead animal! 😦 That’s not a fish, mum!! What do you say? What do you think? Is it a little seal? The poor one…

Back we went… I won’t mention the almost-drowning-part again,  😉  but what came after! I stayed with my mum, very safely at her side. She wanted me to run to get warm! I was completely wet, so was my harnass and my collar… Remember? 😦

Mum learned me a new command at the seaside! She says: Sea! And points to the water! I should run all over the beach to the water, she follows me but less quickly! 🙂  Away from playing children and other humans who maybe don’t like doggies, she says… Mum does not like running…
When I’m in the mood and when there are not too many other attractive things 😉 , I do what she says! So after the very wet story, was I in the mood for a little running? I was thinking thoroughly about it and decided: yes! And I run!

Blinking box has the proof! But look carefully or you won’t see me, I seem to disappear from the video! But i’m there, I even come back!!! 😉 🙂 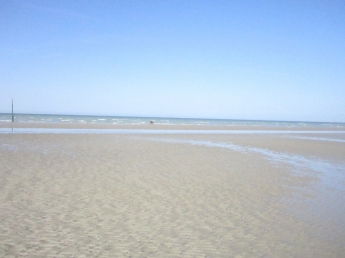 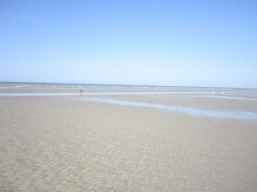