Party one: in the morning, on the beach! Running business and playing business! After almost 2 hours we went back home for breakfast… I was very tired! 😉 And needed hours of naps. 😉

Party two: at noon I went to the restaurant with mum and dad and I got a bully stick! ❤

Party three! The human pup, her husband and two doggies came to town, to the huge dogpark! Go figure! Shasta (malemute) and Goofy (Berner) came to my huge park! ❤ Told them they would see it is bigger than their yard! 😉
My dogness, that was fun! We met Lex at the beginning of the walk and then we went to the waterbusiness! Ohlalala, Shasta is a good swimmer, Goofy does not like to swim that much but then he tried to get a stick from Kito (a Dutch shepherd we met over there) and was so surprised to be so far that he got out quickly. He was the laughing stock, poor guy! (see movie). 🙂
And then there was cute Max (8 months old Staffie) who was cute in the beginning but became a pain in… oh, I should say this ladylike, don’t I? He became a pesky little one, 😦 trying to get on Goofy all the time, but really: all the time… Luckily Goofy is a real gentleman and did not get angry. I think, he better should teach the little one how to behave. As grandpa thaught me that such behaviour is “misplaced”.
In the end Shasta got enough of it and started to get angry a bit, just as Kito did, so we continued our walk and got back in the running business! 🙂
Then Shasta spotted the rabits… ohoh! Gone she was… hunting! Luckily this time she did not catch any. But the result? On the leash. 😦

In the end we were all so exhausted that we got home. I came in, got down in the hall and went to sleep till this morning! 🙂 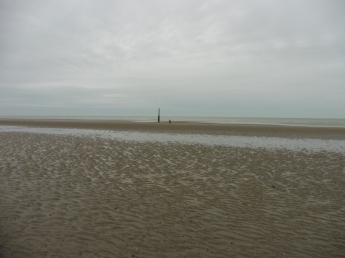 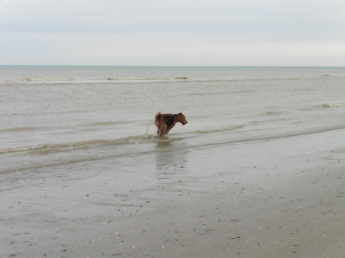 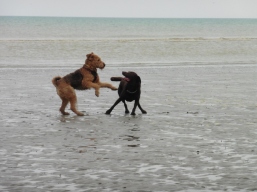 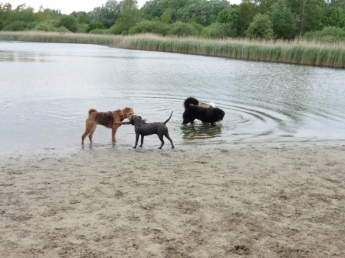 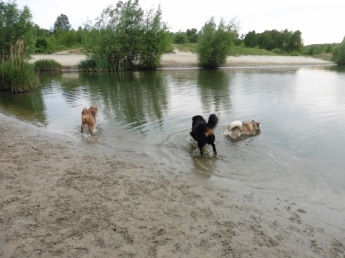 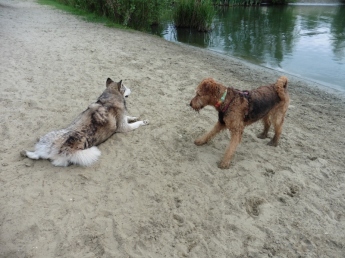 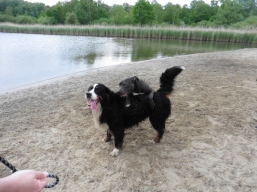 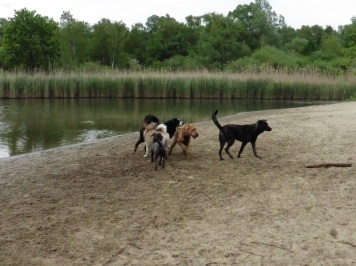