Yesterday morning, we went to the huge dogpark! Big bad surprise! We could not enter! The fences were still there… and I could not believe my eyes! I looked at mum and she had the same stunned face… My dogness, I could cry… 😦

Remember I told you about all the changes in the dogpark for this big summernoise?

Okay, for this big summerthing with 40.000 humans to come… 😉 Well these 40.000 humans left one messy dirt. Another dad told that the night before the men already cleaned with vacuum cleaners as big as houses. And now the special men came to walk all over the place and pick up all the little durt… meter by meter! (inch per inch!!) My poor huge dogpark! My dogness… This made me a bit ill, I did not eat my breakfast when I got home, neither did mum. 😦

Seagulls and crows were all over the place, eating from this unhealthy garbage! Flying away when the big vacuumcleaners arrived! Mum said something about birds and Hitchcock. Did not understand but I did not ask for more bad news, had to look around too much! 😦

Mum says she understands humans want to amuse themselves, that’s okay! Humans like music, that’s okay too. Humans want to listen to that music together with about 40.000 other humans and move a little. That’s okay. Humans want to sleep between the two days of listening and moving on the same place in little houses. That’s okay too. It’s only two days now and one in september. That’s okay… They have to find a place somewhere, big enough, we try to understand that too… I do not understand the last part: why our huge dogpark near a protected nature area? Why mowing all the plants and grass and beautiful flowers? We do disagree a bit on that point, me and my mum: she tries to understand and I do not want to understand. 😦

But me and mum do NOT understand all this garbage around the place! You could not see the grass anymore, and even after vacuuming it was very dirty! Why on earth these music-moving-humans throw away everything on the ground? There were hundreds of bins, another dad said! This aire-lady says that all this is not respectful towards all the animals living next door and normally in the huge park, and these music-moving humans even have less respect for other humans who have to clean up after them…
My dogness, I was so stunned and so sad when we went home! 😦

PS Pics of before and after the summerthing… judge for yourself!

This picture is taken on 31 may… Half way june, the trouble started… 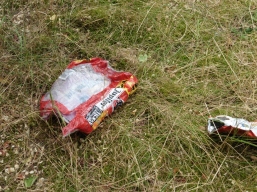